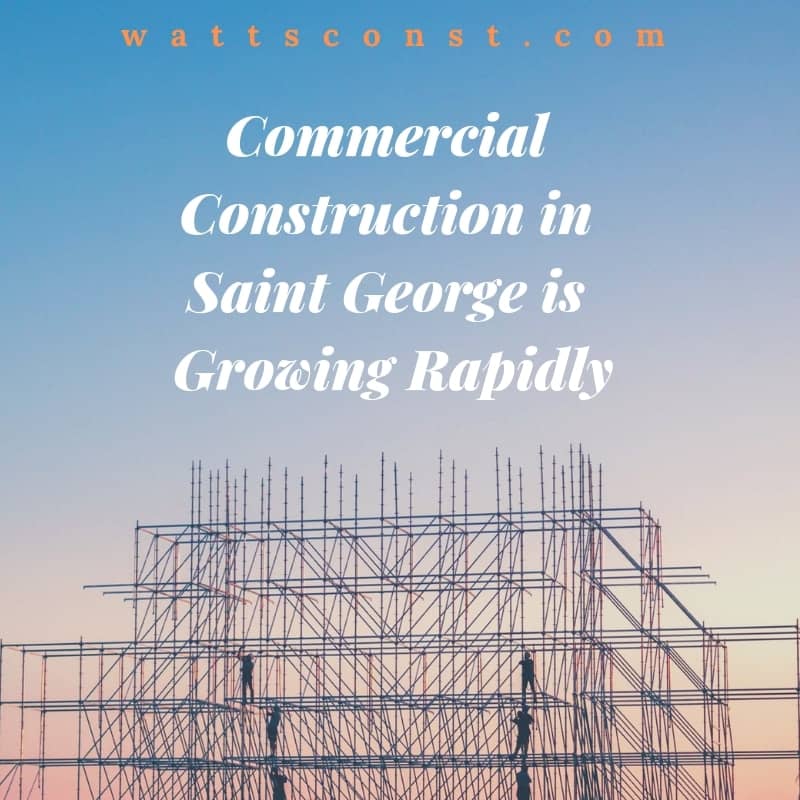 Internet sites say that Saint George, Utah is the fastest growing metro area in the United States.  Because of that, the construction industry in Washington County is expected to continue its torrid pace—both residential and commercial.  Similar growth rates in the last ten years brought a bevy of large projects; however, the next ten years should see even more commercial construction in Saint George, Utah.  This article explains why.

After the real estate bust of 2008, it took about five years to recover and resume the dynamic growth of residential and commercial construction in St. George.  Certainly, residential construction took a bigger hit than did commercial and public building because of the different sources of funding for commercial and public projects, such as courthouses, schools, and retail franchises of national chains.  The assets of nationally known businesses and of tax-fed municipalities helped to build schools and restaurants in the recovery years after 2008. Then from 2013 to 2018, the real estate market became “bullish” to be strong and approaching the inflated prices of 2005.  Developers of both residential and commercial properties are seeing profitable ventures, especially from 2015 through 2018.

Because of the State of Utah’s conservative management of budgets and the low unemployment rate, Utah has a surplus of money to invest in areas that should bolster the economy even more.

Dynamic Growth Over The Next Ten Years

Commercial construction in Saint George should see exponential growth over the next ten years because of the fast rate of move-ins from out of state and from workers and retirees from the more populous region of Utah’s Wasatch Front of the Rocky Mountains, where roughly two million people reside between Ogden and Provo, Utah (including the Salt Lake Valley).

Many factors will continue to stimulate the impressive growth of commercial construction in Saint George.  One is the fact that the region’s capable workforce has attracted large companies to set up in Washington County.  Companies such as Blue Bunny Ice Cream, Walmart, and Family Dollar have built large production and distribution centers, knowing that the majority of the workforce here possesses traits of responsibility, honesty, and hard work.  The subculture of the Church of Jesus Christ of Latter-day Saints, of which 70% of the county’s residents are members, actively instills the values of education, integrity, congeniality, and dependability. Companies need that, so they are congregating to St. George.

Other factors that should enhance commercial construction in Saint George are the expanding airport, the climate, outdoor beauty and recreation, and the room for growth.  The beautiful new airport opened in 2012 and is ready to expand. St. George’s mild winters and hot, dry summers still attract masses, especially “snowbirds” who flock to Washington County for the nice winters then move back to their milder summers.  The red sandstone of the region accents the blue sky, making a beautiful setting. The air is clean, bike and walking paths abound, and the area is rich with hiking and biking trails, fishing, boating, and camping. Plus, access to Interstate 15 is easy.

Because St. George attracts retirees, it will surely be hit hard by the aging baby-boomers, which is the largest segment of the American population.  So, a strong economy, capable workforce, mild winters, outdoor recreation, retirement communities, beautiful setting, all lead to rapid growth in population, which creates the need for more schools, businesses, and public buildings in the St. George metropolitan area.