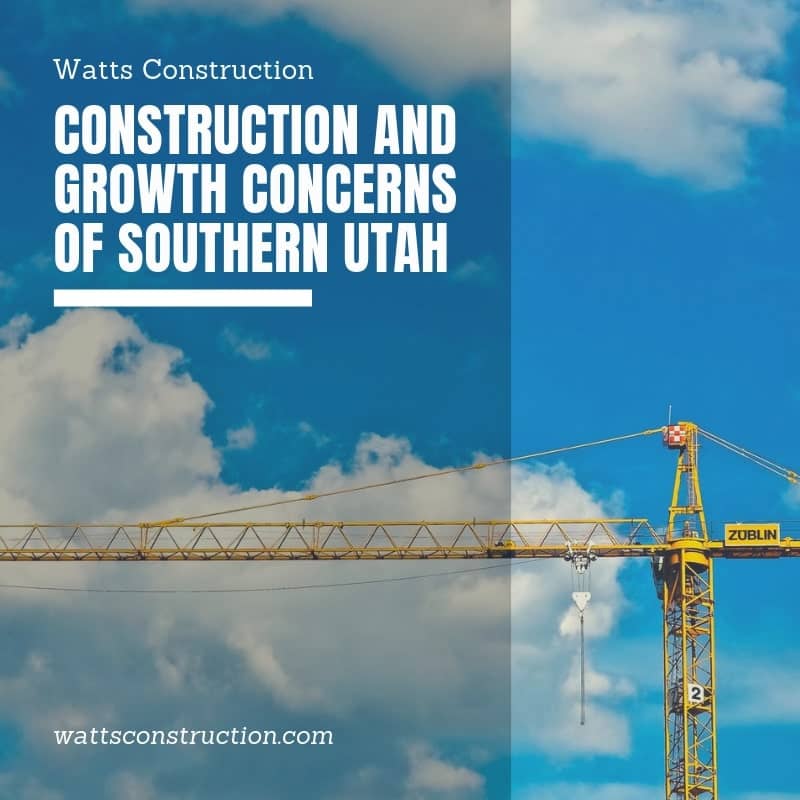 Washington County is now America’s fastest-growing metropolitan area, showing an increase in net population at 5% per year.  Safe, quality construction of housing and public facilities, along with the lack of water in the region, makes for a few construction and growth concerns of Southern Utah.

Settled by Mormon Pioneers in the 19th Century, Southern Utah is known for its dry landscape, hot summers, and scarcity of water.  The Mormon people refer to the Bible, which states “The wilderness and the solitary place shall be glad for them, and the desert shall rejoice and blossom as the rose.”  By most accounts, this has indeed become true in Utah; however, for the St. George region to continue to blossom, it must access the billion dollars promised by the government to develop the proposed water pipeline from the Colorado River and its Lake Powell reservoir.

Housing construction has boasted some unique and beautiful architecture, including desert colors, stucco, and ceramic tile roofing, all maintaining the historical flavor of the Southwestern United States.  But, some of the area’s developments lie close to the Hurricane Fault Line, which is expected at some point to slip again, dropping the western part of the land five to ten feet. Seismologists worry about the damage to structures, which a dip or drop fault break can inflict; however, a dip fault is normally less destructive than a transverse fault quake which scissors back and forth between the landmasses of crust.

Several construction projects are in process atop buttes and hills in Washington County, and geologists are uncomfortable about the potential effects of an impending quake on the lofty housing.  It’s a trade-off: great view for greater risk. Many of the newer buildings have been constructed with safety measures of shock absorption to mitigate the slamming down of buildings, but the older structures are certainly more precarious.  Watts Construction has the expertise to build properties prepared for such an earthquake.

The water problem is seen as the more urgent construction and growth concerns of Southern Utah, so it’s garnering the attention of politicians, city planners, and governmental, civil engineers.  Until the 21st Century, the Virgin River has supplied sufficient water for the populous of less than 100,000, especially after the opening of Sand Hollow Reservoir in 2005 between Hurricane and St. George, Utah.  The reservoir stores water and allows seepage down to the Navajo Sandstone Aquifer for replenishment. But, with the fast growth which is expected to accelerate for many years, the Washington County Water Conservancy District is scrambling to get the pipeline built.  It’s been slowed by the Feds because of bickering over which department should take the lead on the project.

The proposed pipeline from the Colorado River will be expensive because it’s roughly 140 miles and it requires pumping upward by 2,000 feet of elevation.  The goal is to store 86,000 acre-feet of water in reservoirs, existing and yet to be built. If not for a shrinking Virgin River, this project would not be so necessary at this time.

One source of revenue for the proposed pipeline is an increase in the cost of water per gallon for the residents of Washington County.  Among the countries cheapest, the water district could triple the cost of water and still be under the national norms for the price of water in desert cities.

So, the construction and growth concerns of Saint George, Utah involve a potential earthquake from the Hurricane dip-fault and the scarcity of water to provide for a rapid increase in population.