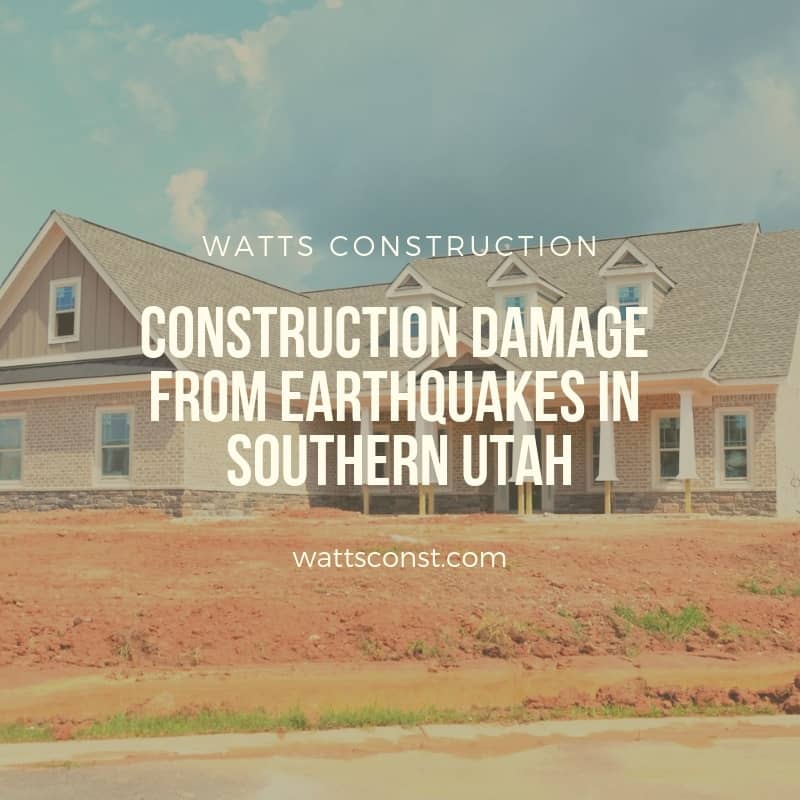 While not common knowledge, Southern Utah’s populated areas are considered “earthquake country,” experiencing about 300 hundreds of events of seismic energy every year.  The strongest earthquake occurred in 1992 at the Washington Fault, which runs from the Arizona strip through Washington Fields and the City of Washington. It caused damage to buildings in Hurricane, Springdale, Washington, and Saint George.  This article discusses the earthquake situation in the Saint George area and the past and potential construction damage of earthquakes.

The 1992 earthquake of Southwestern Utah measured 5.8 magnitudes, enough to inflict construction damage to many structures that were not built to withstand such forces.  The earthquake caused a landslide as far away as Springdale, Utah, near Zion National Park.  At least three homes were destroyed. In Hurricane, Washington City, and St. George, Utah, closer to the quake’s epicenter, several buildings and houses sustained damage, such as cracks in plaster and other masonry, chimneys breaking, and cracks in brick or stucco walls.  Damage from earthquakes was not limited to the buildings themselves. Some of the more costly damages came from equipment falling off shelves. This happened at a radio station in Washington, Utah, where 500-pound machines “walked” off shelves and crashed to the floor.

It was evident in the earthquake of 1992 that the buildings most affected were older, unreinforced construction.  Fortunately, responsible construction companies, like Watts Construction Company, include a strategic placing of steel supporting materials and shock-absorbing devices, especially in important commercial construction projects, which are meant to serve the community long into the future.  Engineers work hard to balance strength with shock absorption in construction, giving special consideration to the bedrock and soil under the building. Concrete footings and pads must meet stringent specifications, too, which can reduce construction damage from seismic energy.

About 60 percent of Utah’s earthquakes occur along the Wasatch Front, where roughly two million people reside, but they are typically less than 4.0 magnitude, hardly felt anywhere.  Some studies assign a 25% probability of a 6.0 or higher quake at the Wasatch Front in the next 50 years, so young people may see it. Other experts say it’s a 60 percent likelihood.  Roughly the same predictability exists in Southern Utah.

The two faults in Southern Utah where seismic energy has occurred are the Washington and Hurricane Faults.  Fortunately, they are “dip faults,” not transverse faults. Dip faults see a sudden drop between land masses, so while “unsettling,” they don’t demonstrate the kind of scissoring back and forth of a transverse fault.  An earthquake at a transverse fault, like San Andreas in California, will cause much more damage to structures. More shaking, back and forth, not up and down, occurs.

So, construction damage from earthquakes is a very real possibility in the St. George area, though rarely occurs.  Fortunately, good construction companies can build responsibly to minimize damage, and the faults in Southern Utah are the less destructive form of faults:  dip faults.