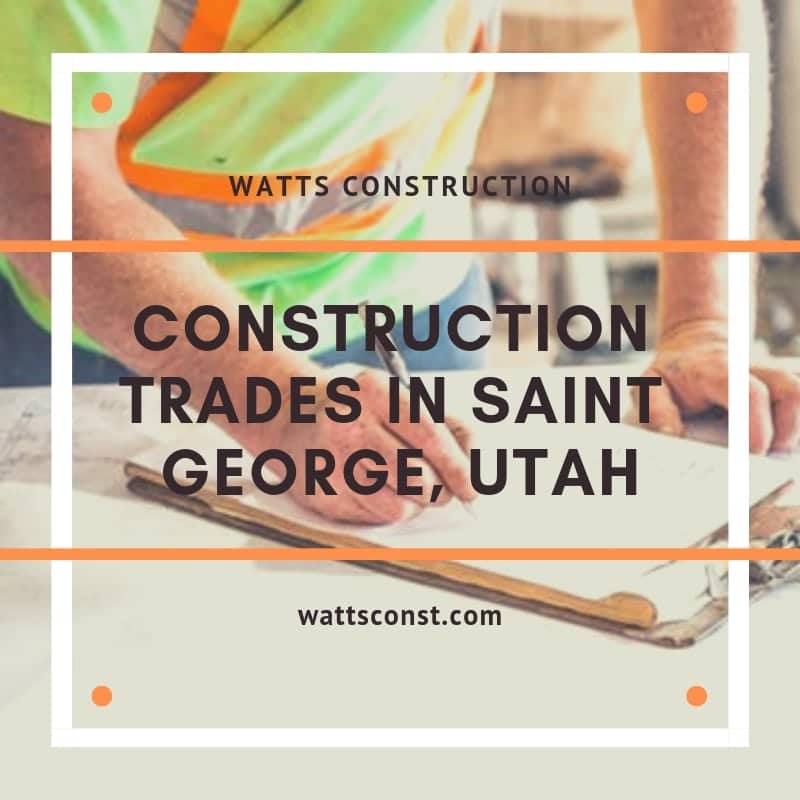 From carpenters to glaziers to welders, there’s a beehive of activity buzzing in the various construction trades in Saint George, Utah for work in houses, commercial buildings, and public facilities like schools. It’s been ten short years since construction workers were selling and giving away their tools, after the real estate bust in 2008; but now, the workers and their tools are in high demand. With Saint George, Utah being named the fastest-growing metro area in the United States, it follows that the construction industry is booming in Washington County.

For just a couple of examples, the local university is expanding with multi-million dollar projects, and the county school district is building a new high school in Saint George to meet the growing population of students.  New businesses and hotels are seen in progress throughout the county, and housing subdivisions are ubiquitous. This presents a welcome opportunity for all types of workers in the construction trades.

Not only is the construction industry a vital part of our county’s economy, but it is also dramatically boosting the economy of Southern Utah, where now the unemployment rate is less than 3%.  Nationwide, more than five million people work in construction, which consists of project managers, estimators, architects, engineers, superintendents, drywall installers, plumbers, concrete workers, carpenters, masons, plasters, electricians, roofers, painters, and heavy equipment operators.

The happily-employed people in construction trades in St. George are working in residential, commercial, and public building projects; and many subcontractors are weeks behind in progress.  The general contractors hire subcontractors who specialize in the trades needed for each individual project. Some subcontractors get paid upon completion of their part of the work, while others must wait until the entire building is completed.  Subcontractors may be small companies of three or four workers, and others may be large with hundreds of people among their crews.

Commercial construction projects often require large organizations to supply the personnel in particular trades, and they frequently call on professional associations and trade unions to access the resources needed to get the jobs done.

Preparation to work in the construction trades in Saint George normally involves OJT (on the job training) and well as some formal education in classrooms and workshops.  Tech schools, colleges, trade schools, and Job Corps are good places to get both classroom and hands-on training.  Without proper training, a worker may miss an important part of the installation that could lead to failure, fire, or worse.  Part of the preparation process includes learning the city and county codes for materials and how things need to be done. Normally, in applying for a license as a tradesman, you will be expected to pass a test on the local code requirements for a particular trade specialty.

Workers in construction trades can get licenses as apprentice, journey, or master levels.  These can take years to achieve. Apprentices work under the supervision of a licensed technician for three to five years.  The Journey level requires a high number of experience hours, along with a written test. Achieving the master level requires working two to four years under a master-licensed supervisor as a journeyman, along with a written test.

So, whether you are interested in welding or plumbing, the construction trades in Saint George, Utah are active and in high demand.  And, you can start with on-the-job training and work your way through a state-approved apprenticeship program.