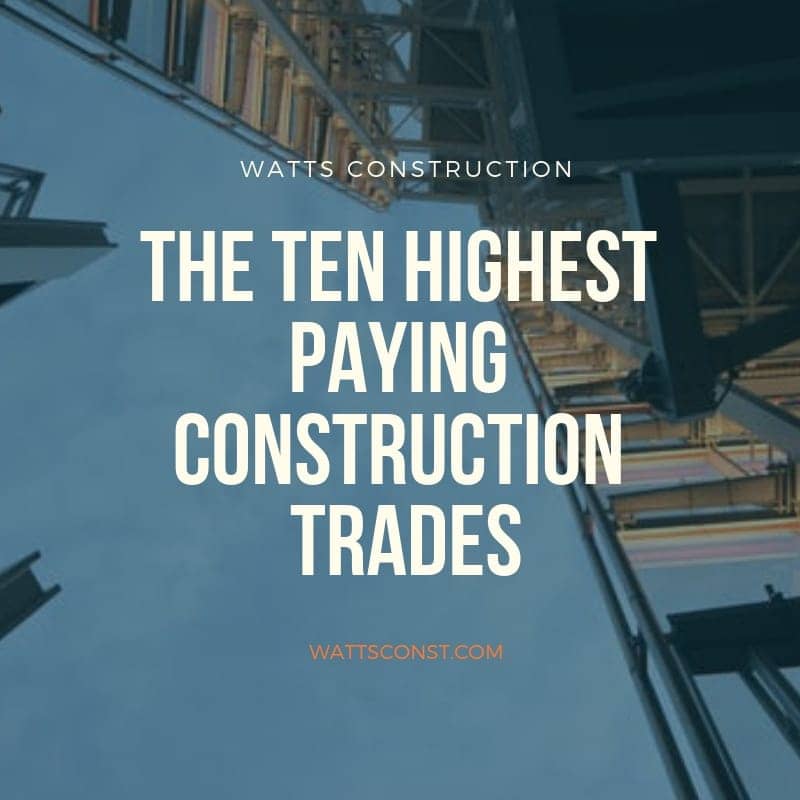 If you like working with your hands, one of the ten highest paying construction trades may be more fulfilling to you than college degrees and office jobs.  You can turn a trade into a great business.  And when I say “great,” I mean not only financially, but also enjoyable, rewarding, and provide the freedom you want to run your own schedule and work as much as you want.

Let’s be clear.  Office jobs make us fatter and weaker unless we have the discipline and time to hit the gym hard a few times a week.  Whereas construction trades require more physical activity, so they tend to keep us leaner and stronger, but they can be more dangerous, too.  And the fact that the median pay in 2015 for construction workers was higher than for non-construction workers—$41,380 versus $35,540—doesn’t hurt. This article presents the ten highest-paying construction trades.

Elevator installers and repairers earn an average of $80,000 per year, which is more than any other construction trade. There are 66 unions for elevator technicians in the USA.  The first step is to contact a union and ask about the next application period.  After applying, you can take an aptitude exam.  This is where you either show your abilities or don’t.

Boilermakers make on average $60,000 a year. They build and repair boilers and other structures that hold liquid or gas.  The International Brotherhood of Boilermakers is the largest union, and there are others.  The work is dangerous and physically demanding.  Some jobs require being away from home for extended periods.

The third highest-paying construction trade is a construction and building inspector, who earns a median wage of $57,000 per year. It’s their job to point out situations where the construction does not pass governmental codes.  There are the city, county, and private building inspectors, checking everything from the roofing to the cracks in the basement foundation.

Plumbers, pipefitters, and steamfitters average about $51,000 per year income. Waste, water, gas, and vent lines are installed by these technicians.

The average pay for ironworkers per year is $49,000. These are the strong people, able to lift, move, weld, and hold heavy objects.  The ironworker’s unions can steer you in the right direction for training and getting work.

Sheet metal workers are seventh in the list of the ten highest-paying construction trades. They work with thin sheets of metal and aluminum.  They fabricate, shape, and screw ductwork and parts for airplanes, cars, and other machines.  Sheet metal fabricators earn a median wage of $46,000 per year.

Construction equipment operators average an income of $43,000 a year. Operating dozers, loaders, and excavators takes skill and awareness of your surroundings.  A mistake can be deadly or damaging to property.

The average pay for carpenters is $41,000 per year. Carpenters are good at framing houses and commercial buildings, door frames, stairways, rafters, and finishing the look of cabinets and shelves.

You can see a lot of variety in the ten highest-paying construction trades, and some are riskier than others, so that might be a consideration for you and your family.