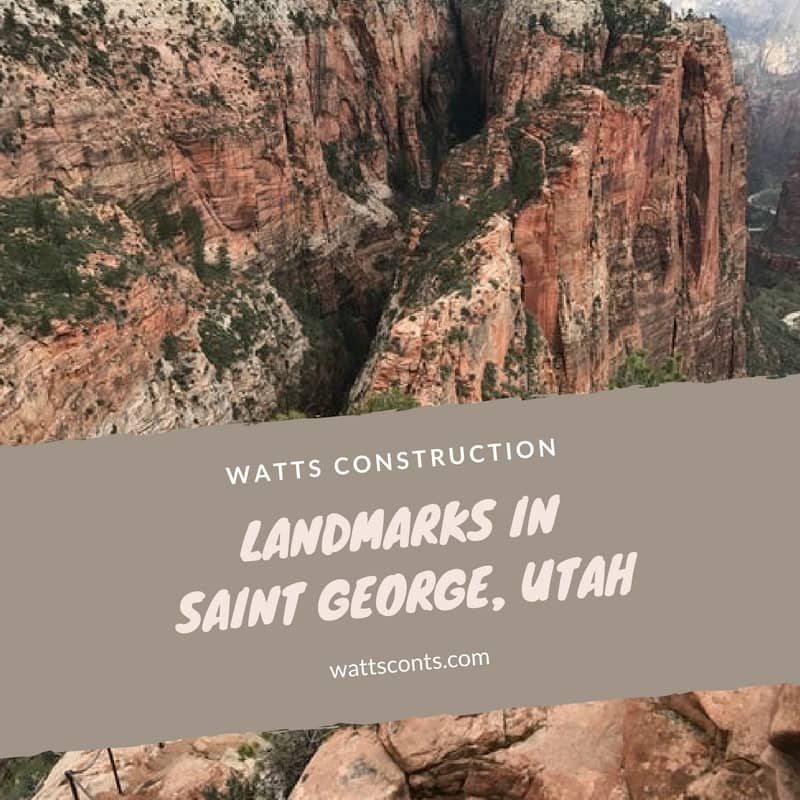 The Temple of The Church of Jesus Christ of Latter-Day Saints in Saint George tops the list of the best landmarks in Saint George, Utah.  It is a magnificent edifice of history, beauty, and sacred meaning for the region.  It was the first Mormon Temple open in Utah for religious ceremonies. Taking less than six years to complete, its construction was ordered by Church President Brigham Young in November of 1871.  It was completed in April of 1877.

The St. George LDS Temple’s foundation was formed with crushed lava rock, and its walls from the indigenous red sandstone, which was plastered for a white finish.  Entering the St. George Valley by car or airplane, the white Temple catches the eye, stark and strong against the red dirt and blue skies of St. George.  It serves the local Mormons for holy ordinances, to this day.

The Kayenta Community makes the list of best landmarks in Saint George, Utah because of its strict adherence to fine architecture of the Southwest, prudent planning to preserve the ecology and landscape while growing, and the amenities of art galleries and gift shops.  Home to several celebrities, its appeal is obvious to visitors.

Just northwest of St. George City (Utah’s Dixie) lies a small, charming town of Santa Clara, where the Jacob Hamblin Home still stands.  The Mormon Church called stone masons, including Elias Morris and the Averett Brothers to build a home for the “Buckskin Apostle to the Native Americans:” Jacob Hamblin.  Jacob Hamblin had a special love for the American Indians and was sent to Southern Utah in the 1850s, along with several young, Indian missionaries, to preach the Gospel of Jesus Christ to the area’s Native Americans.  He was instrumental in developing peaceful relations between Mormons and Indians in the Southwest. The Jacob Hamblin Home qualifies as one of the best landmarks in Saint George, Utah.

At the heart of St. George’s business district is located Ancestor Square, a collection of twelve separate buildings, some of which are designated on historic registry.  The original jailhouse, Sheriff’s office, and Gardeners Club building are three of the nostalgic structures.  Now, Ancestor Square offers tasty restaurants and gift shops, all the buildings have been renovated to welcome the public with class.

In downtown St. George, you’ll find the historic Mormon Tabernacle, which opened in May of 1876 as a public works building for both Church and Courts.  It has been called, “The Jewel of the desert” and is a symbol of St. George’s pioneer history, making status of one of the best landmarks in St. George, Utah.  Made of the rustic sandstone, it is still in use today for concerts and Church gatherings.  Brigham Young had commissioned the building to the Tabernacle to help the locals succeed in settling the town.  They had attempted to grow cotton, but the dry climate made cotton growing virtually impossible.

St. George’s historic downtown showcases the preservations of antique, red sandstone buildings with newer edifices that match the old architecture.  Along Tabernacle Street stands a monument of a county municipal building, which is just several years old.  It was built to match the historic buildings, and it’s gorgeous. Across the street is the town square, bordered by historic buildings for libraries, schools, and summer water fun.  It is walking distance to Bed and Breakfasts, gift shops, hotels, restaurants, and parks for outdoor festivals.

There are many other landmarks and impressive buildings in Utah’s Dixie, but these are certainly some of the best landmarks in Saint George, Utah.  As a postscript, St. George’s long-time mayor, Dan McArthur is famous for saying, “There are two types of people in America: those who live in St. George and those who someday will.