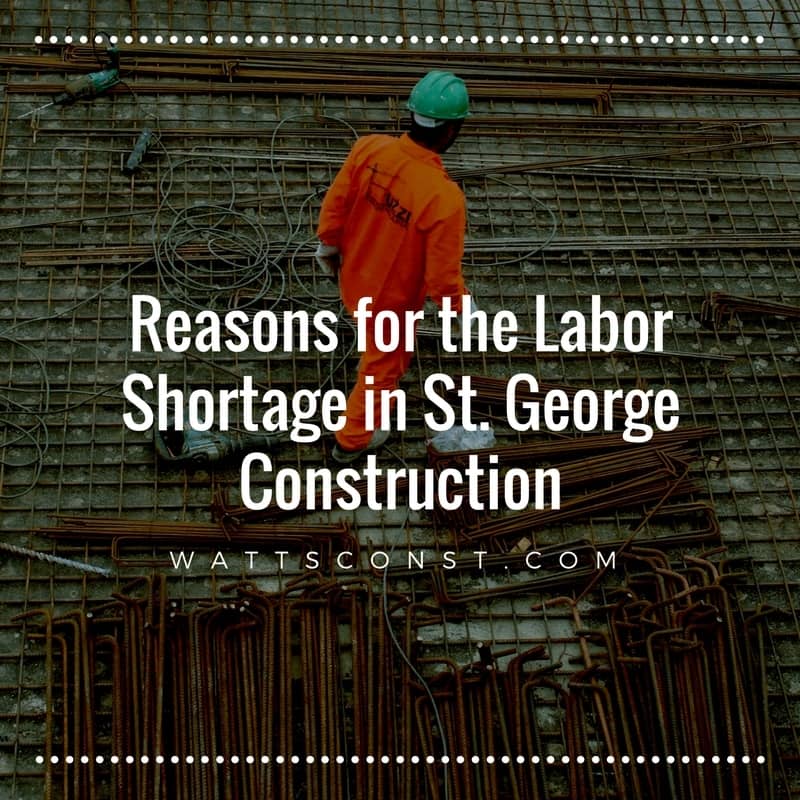 Reasons for the Labor Shortage in St. George Construction

The St. George area has no shortage of active construction sites, as you have likely noticed driving around town. The city of St. George is one of the fastest-growing cities in the entire nation and has held that status for a number of years. With that kind of consistent population growth, it can be assumed that there would be no shortage of available St George construction labor positions – and you’d be right. In fact, over 4,000 industry jobs were provided in 2017. Job availability is not the issue. The issue is that there seems to be a lack of qualified construction workers to take those jobs. According to recent data, the Utah construction industry as a whole would have grown even more than it did had there been more skilled people to hire. This problem naturally affects smaller contractors in a much bigger way than it does larger ones, which are the ones that really struggle to stay in business with a shortage of employees.

This labor shortage likely has its roots in the economic recession and subsequent “construction crash” that took place a decade ago, as many companies went out of business and thousands of service workers (approximately 40,000 to be exact) like contractors, carpenters, electricians, and plumbers removed themselves from the industry during that time and have not returned, even though things are roughly back to the way they were pre-2008, arguably even better. With a booming, healthy, and recovered industry alongside one of the strongest state economies in the US, it’s a shame that folks haven’t flocked to take up employment. Of all the workforce markets in Utah, construction is the one with the largest labor need, and St George construction labor is no different.

There are a lot of theories as to why this is happening. Some attribute it to a generation gap – hardly any millennials coming into the industry leaving only the skilled workers in the middle of their careers. Millennials are often criticized for being unmotivated, having an aversion to physical labor (what most would call “hard work”) which keeps them from joining this type of workforce. Many seasoned folks in the industry view this as extremely fortunate for obvious reasons but also because construction has consistently been a field that, though viewed as inelegant, often exemplifies the “American dream”, starting from the bottom and working your up to a financially and personally rewarding career through determination and hard work. Another unfortunate aspect about the St George construction labor problem is even though this industry pays workers a wage that is significantly higher than minimum wage at close to $30 an hour, yet the labor shortage remains. Not only that, but it’s a known fact that construction jobs reward quality work with raises and increased opportunities quickly, as in a young person could be making what they would certainly consider very good money in less than 6 months.

The St George construction industry is not only an acceptable job to consider, it’s a great one. It can easily support a family, let alone a single person if given the chance and one demonstrates their value through hard work. Experience in construction also allows people to obtain useful and in-demand skills that will be beneficial to them for a lifetime, long after they’ve either left the industry or retired. If you happen to be someone who’s looking for work or knows people who are, help break the negative stereotypes and persuade them to apply for St George construction labor. It’s more than likely that they will be pleasantly surprised how beneficial and rewarding this career choice can be.