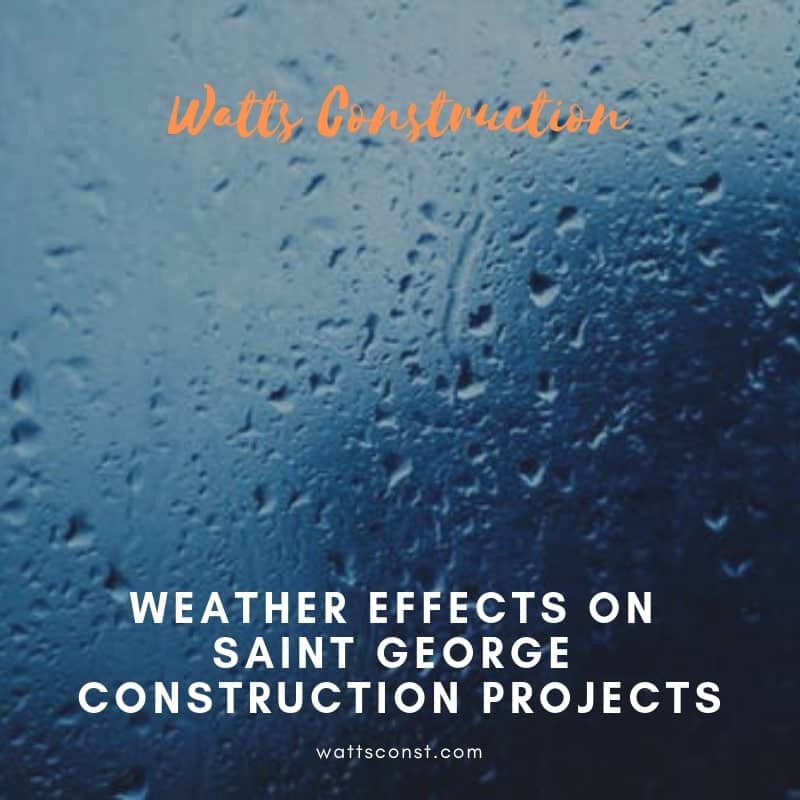 Inclement weather can wreak havoc on a construction project, even in Saint George, Utah, where weather is less dynamic than in the mid-west and regions of higher elevations.  Commonly known for its mild, uneventful winters and hot, dry summers, Saint George occasionally gets surprised with thunderstorms, wind, and even a little snow or hailstones.  This article discusses the weather effects on construction projects.

When bad weather causes delays with Saint George construction projects, many people are affected.  First, the owners of the projects must respond to a delay in an asset’s operation.  For example, if a medical building is late in completion, it can affect the timing of marketing, hiring human resources, detract from a competitive advantage, delay a return on investment and reduce profits in the first year of operation.  Retaining commitments from medical staff can be very difficult because people have families and schedules to keep with regard to residence, school, relocation, etc. Moreover, subcontractors can be lost to other jobs that become available and meet their schedule better.   Delays in projects cost money and can bring legal problems with contracts.

How Does Weather Cause Delays?

Lightning poses risks in multiple ways.  If a project is in a phase that uses scaffolding, people are exposed to heights and metals, which increase the likelihood of a harmful lightning strike.  Placing steel beams in a high-rise structure puts workers at risk for electrocution, strikes, and falling to one’s death. Roofing a building should not be done when lightning is within a mile away.

Rain makes surfaces slippery for workers, dilutes poured concrete, ruins some materials, affects the settling of foundations, and can compromise a worker’s immune system to the point of getting sick.  Fortunately, Saint George construction projects seldom have to deal with rain because of only about nine inches of precipitation per year in Washington County.

Wind is hazardous not only for the risk of a worker’s losing balance or being blown off a height, but also for the potential of objects flying toward workers.  For example, trying to roof a building on a windy day is ill-advised.

Snow carries many of the same hazards as rain, with one exception: lower temperatures.  The snow that thaws will run into cracks and crevices of landscape and construction materials.  Then when it freezes again, it expands and can cause cracks in materials, like concrete. Snow rarely, if ever, affects Saint George construction projects.

Extreme temperatures affect the workers as well as the materials.  Cold causes materials to contract, tightening up joints, which can leave gaps and change the way materials fit together.  Cold also challenges the immune systems of workers, leaving some people more susceptible to infections, especially respiratory illnesses.  Missing work time due to illness is costly and is an indirect result of extreme weather. Extreme heat will expand materials changing the fit of the joints.  Heat also causes workers to sweat more, which requires continual rehydration. Gatorade and water are recommended to maintain body fluids and to avoid heat exhaustion and worse, heat stroke.  In Saint George construction projects, the summer heat is a valid concern.  Because 105 degrees is normal during Washington County summers, water must be stored on site, easily accessible, and drunk continually throughout the day.

Technology has improved the accuracy of weather forecasts, thereby aiding contractors immensely; however, there is still an element of unpredictability, occasionally bringing surprise weather and chaos to the construction schedule.  Smart contractors prepare for the foreseeable weather and also the unforeseen to prevent any unnecessary negative weather effects on construction projects. This is especially important in longer-term projects, such as bridges and high-rise office buildings.