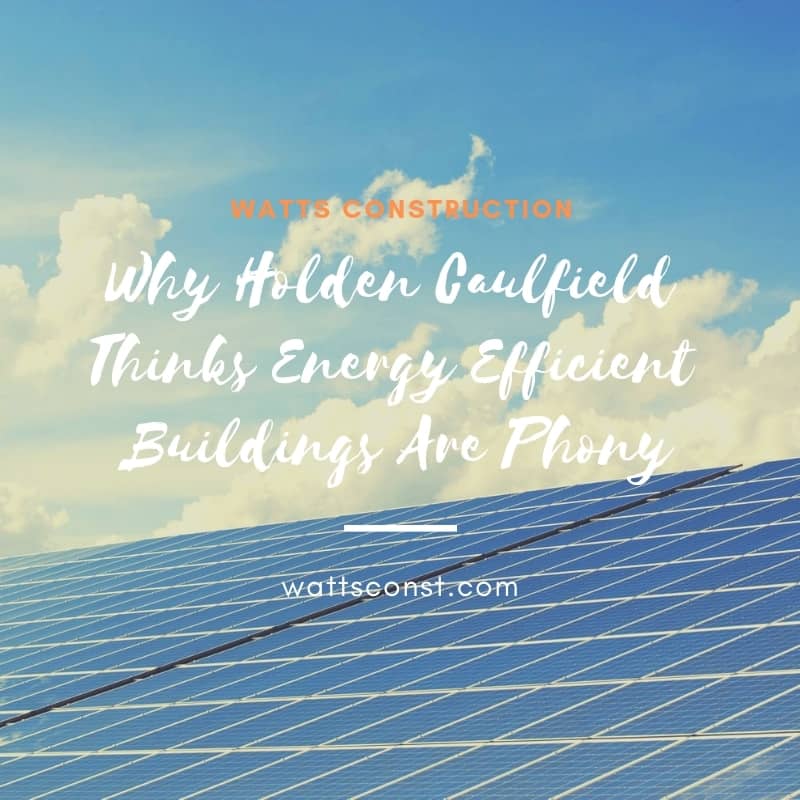 Holden Caulfield is the main character in the classic novel, Catcher in the Rye, by J. D. Salinger in 1951.  Holden’s character is endearing because he is smart, but rebellious to the world of adult phonies. He admits he is a coward, a terrific liar, and clumsy; but he also can be sweet and comical, especially in loving his younger sister, Phoebe.  Holden would likely have some funny and cynical things to say about energy-efficient buildings because they’re serious and frugal, an artifact of phony adults, reflecting the demands of “money-grubbing” society.  This article describes why Holden Caulfield would consider energy efficient buildings phony.

Holden Caulfield would bristle at how sound-proof the energy efficient buildings of today are.  He would say that people have the right to hear music, wherever it’s coming from.  Peace and quiet, to him, is unnecessary and boring. “Listen it’s what adults want all the time.  You people and your secret meetings are dangerous to society. You’re a bunch of phonies.” He would argue with the adult and say, “You can lie, but I lie better than you.”  He would also show disdain for the rich business people who only want to get richer by owning energy efficient buildings. “They barely open their squeaky wallets to pay for heat and air conditioning,” he would deride.  “Live a little, you bunch of rich phonies. The people who work at the power plants need to get paid, too!”

You Can’t Get a Good Sleep Inside ‘Em

Caulfield would complain that energy efficient buildings “make it so you can’t get a good night’s sleep.”  He would point out intellectually how important it is for the cool night air to enter the bedrooms, giving a person the chance for the best sleep possible.  “Listen, you can’t keep a room’s temperature the same 24 hours a day, 7 days a week. It’s not natural. I don’t think the human body is meant to be pampered like that.  We can adapt; it’s good for us. Wouldn’t we all be a bunch of weaklings if we had to live in 72 degrees every minute of the day? This apartment building is phony!”

You Can’t Have a Decent Party

Holden would assert that energy-efficient buildings are lousy for parties because there’s no place to go to cool off or warm up.  “All the sweaty dancers in one room have no place to go to cool off. And if you want to hear what’s going on in another part of the house, you have to go there and interrupt.  That’s not cool! Try opening a window. You sort of have to be a locksmith.” He would shun the thought of attending a movie party in an energy efficient building.  “I hate movies.  Reading books is much better for humanity.”

Holden would not allow his little sister, Phoebe, to spend much time in the fortress of an energy efficient building, where adults would have too much influence on her.  He would take her to less formal place, like a park, where she can mix with other children, stand clear of other adults and see anyone who looks not to be trusted.  “Listen, Phoebe, we’re safe here. The phonies are preoccupied, pretending to watch their children in this place.”

Energy Efficient Buildings are Too serious

“Listen, I may look old, with my gray hair and how tall I am now, but I’m still a kid, and I like it that way.  If I spend too much time in this building made for serious adults, I’m afraid it would rub off on me. I don’t want to morph into a phony.”